Ladies, an excellent guide appeared on the Cooper Review about non-threatening leadership strategies for women. I’d say they also apply in non-leardership positions, these are simply “rules of behaving properly” at work. Whatever the field, regardless of whether an institution is private or public, these have been very common experiences for me. 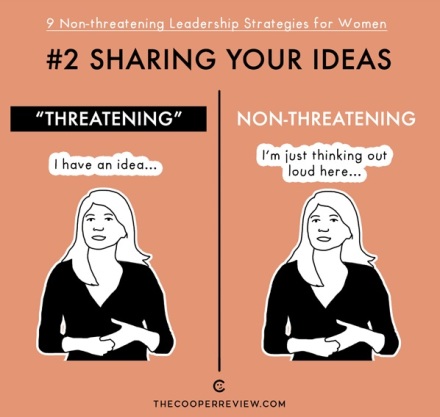 Caption for this photo come from the Cooper Review: “When sharing your ideas, overconfidence is a killer. You don’t want your male coworkers to think you’re getting all uppity. Instead, downplay your ideas as just “thinking out loud,” “throwing something out there,” or sharing something “dumb,” “random,” or “crazy.”

For the other cartoons, check out the original source.

So this is not only a headless and nude woman, she is also a cake… I am sure there was no other option. 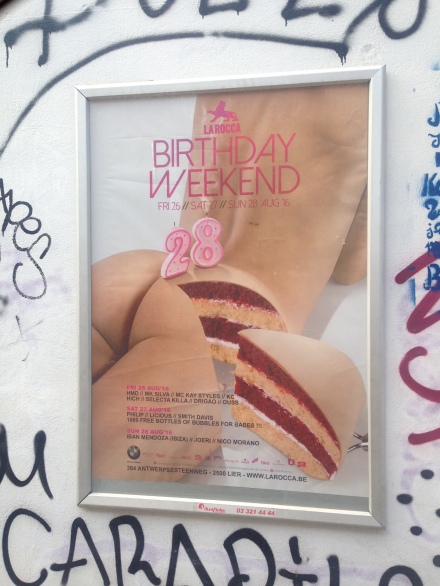 For anyone who has missed this amazing Tumblr-blog, check it out. It showcases posters of Hollywood movies that feature decapitated women. And there are many. (For some more advanced feminist theory on the subject of the male gaze read Laura Mulvey’s influential essay entitled Visual Pleasure and Narrative Cinema.)

Although this is a French movie, you get the idea.

A very interesting article on a Hungarian site lead me to two articles in English that discuss pregnancy at the workplace, and warn that people should think twice before judging the (expectant) moms. Laura Bates’ article appeared in the Guardian: Seven questions to ask yourself before judging a pregnant colleague.
Here is one of the seven questions:

“4. Would I say this to the father?
Worried that sleepless nights, nappy changes and general emotional exhaustion will take their toll on a new mum? They might, to an extent. In much the same way that illness, bad breakups and family bereavements sometimes take a toll on all of us. But we don’t suggest that people dealing with these problems should be sacked, do we? Sleepless nights are a natural part of life as a new parent. But fathers aren’t deaf to babies’ night-time screams. They, too, are experiencing major life upheaval and the emotional rollercoaster of early parenthood. Why is it that we don’t discuss the impact a new baby will have on a man’s work life?”

I find this a very very relevant comment as I have yet to hear it from a man that at a job interview he was asked if he was planning to have any children.

The other article is entitled Female company president: “I’m sorry to all the mothers I worked with” and was written by a (former) journalist who worked as a manager at The Huffington Post and then at The Washington Post in her mid-twenties. She judged and judged and judged, until…. you guessed it right. Until she became a parent herself.

Short quote from her article as a teaser:  “I wish I had known five years ago, as a young, childless manager, that mothers are the people you need on your team. There’s a saying that “if you want something done then ask a busy person to do it.” That’s exactly why I like working with mothers now.”

If you’re a woman (especially between 20 and 35), chances are people have asked you these questions.

Let’s go beyond trying to analyze why and how can people let themselves be so inconsiderate, insensitive and downright mean to ask questions they would not want to answer themselves. They probably can’t help it. The interesting thing is: how to respond appropriately? Is there a funny, witty and smart way of a comeback? According to Amanda Marcotte, the author of It’s a Jungle Out There: The Feminist Survival Guide to Politically Inhospitable Environments, there is. If someone asks “are you planning on having a baby anytime soon?”, you just need to say: “I can’t.” And how is this not a (bit cruel) lie? “Here me out.” begins Amanda. “You really can’t have a baby anytime soon. After all, you’re not pregnant, are you? So having a baby is, at bare minimum, nine and a half months away, and that’s if you just so happen to run right home to find an erection-spotting man who doesn’t mind skipping the condom and you’re currently ovulating. So you quite literally can’t have a baby anytime soon, depending on your definition of “soon.” Not a lie at all.

Advertizing in the streets of Brussels. Did it not bother anyone at the advertizing agency (or at Esprit) that she is not even wearing a watch while advertizing it? There’s gotta be more creative ways to sell this…

Watch this brilliant video on market segmentation by gender and find out how we are tricked into paying more. The sketch appeared on The Checkout, an Australian television series which discusses consumer issues.

Are we buying it or #notbuyingit?

2014 campaign of the UN. They are encouraging men to: “Record a video of yourself speaking out about women’s equality. Visit heforshe.org, send it to us and we’ll share your message with the world”

I wonder if participating in campaigns like this is only considered to be cool in the US and in Western Europe — I have a hard time imagining that there will be a lot of contributions from Eastern Europe, where the general sentiment is that “women are already equal, what more do they want?!”

A brilliant video appeared today in the Guardian about what if we reversed the roles in street harassment.

Check out the men becoming all uncomfortable and even say: “You can’t talk to us like that!”

Even though this interview was recorded decades ago, the author of The Second Sex has evergreen messages. The video might be a bit long to be YouTube-audience friendly, but it is worth to watch!