Feminism is a collection of movements aimed at defining, establishing, and defending equal political, economic, and social rights for women. In addition, feminism seeks to establish equal opportunities for women in education and employment. A feminist is “an advocate or supporter of the rights and equality of women.” (source: wikipedia)

What is feminism not?

The hatred of men, the advocacy of women’s superiority, the religion of ‘hairy-legged females’ (yes, I heard that many times), the notion that women want to live in matriarchal communes (yes, this is also a common one), or a swear word.

What is this blog about?

News, articles, photos, events, videos, cartoons, (street) art, interesting bits and pieces about, by and on women and their lives in various places of the world. Cliches and stereotypes. Everyday things that we rather not notice, not mention, not question.  Gender, politics, diversity, and all the scary isms: ageism, sexism, racism, chauvinism, you name it. From someone who knows what it is like to live in (Central) Eastern Europe, North America, and  Western Europe. A born-again vegetarian (not all feminists are) with an unruly cat, a boyfriend, a family and a very diverse group of friends. Someone who has to kick herself in the butt to do physical exercise but still does it because it is healthy. Someone who enjoys a heated intellectual debate but at the same time finds carefully selected products of pop culture equally fascinating. An ordinary girl. Just another feminist from next door. (Getting anxious? We might be everywhere.)

Do we still need feminism?

Yes, it it still a long way to go. 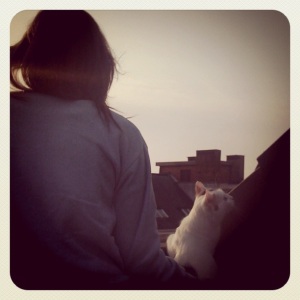